A Word From Stan Lee 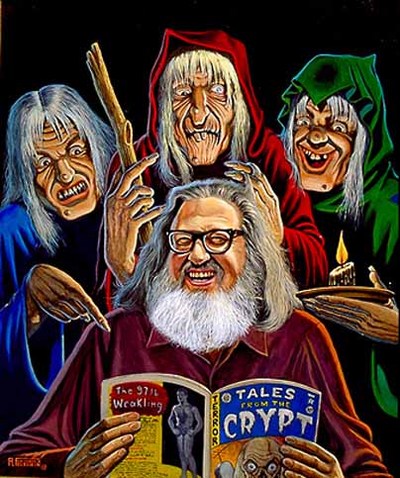 Horror and comic books have gone hand in hand since the early 1950's with EC's change in direction after Bill Gaines took over the family business and revolutionized the comic book industry. EC stood for both Entertaining and Educational comics and Gaines truly did try to do both and it was reflected in the quality of the books he published, treating their titles as more than kid stuff and encouraging writers and artists to think outside the box and make people think, no imposing a 'house style' as some of the other companies did at the time and even allowing artists to sign their work which wasn't common at the time. Later on in the decade Fredrick Wertham's crusade against the perceived evils of comics targeted EC specifically and U.S. government made an example of the company after Gaines' impassioned hearing before the Senate with many rules of the Comics Code Authority written especially for the types of books that EC published. Gaines was forced out of the industry and all of his The Comics Code heavily censored what comics could and could not do for decades afterwards although slowly over time publishers found ways around the guidelines and pushed against them, leading to a resurgence of horror comics in the 1970's.

A Storied History of Censorship 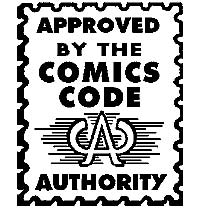 Comics as a medium gained increasing popularity during and immediately after the second World War with soldiers getting hooked on reading them, as such companies (most notably EC) began to produce more mature and violent comics to satisfy demand, this mixed with the growing popularity of super hero brought increased attention to the medium. A psychiatrist Fredrick Wertham began a study into what he saw as the negative effects of comic books on children and wrote articles for several magazines such as Ladies' Home Journal and wrote a book on the topic, Seduction of the Innocent. He claimed that there were direct correlations between children reading comics and growing up to be gay, violent criminals. His book made several wild claims from sexual subtext hidden in comics, Superman being both un-American and a fascist, the gay undertones of Batman & Robin's relationship as well as Wonder Woman's with her Holiday Girls, the coining of the term "headlight covers" that referred to female character's having their breasts prominently display. He especially went after the horror comics of EC such as Tales from the Crypt, especially citing decapitations and 'injury to eye' panels, of which he provided panel examples of in his book. With the release of his personal papers and details of his study released by the Library of Congress in 2010 it was discovered that much of his findings and the correlations he made were falsified and exaggerated.

His crusade gained popularity and his argument against comics were event brought to Congress in 1954 which lead to the formation of the Comics Code Authority that heavily censored comics for decades and the cancelation of several titles and shuddering EC's comic business, the only surviving title being MAD Magazine since it was classified as a magazine and not a comic book. The criteria of the code stated:

Over time the code was slightly updated and some of it's guidelines relaxed, such as the inclusion of stories of monsters and other supernatural entities if they came from a background of 'literary merit' such as Frankenstein's Monster or Dracula and the allowance of the topic of drugs and substance abuse, but only if they were shown as an addiction and shown in a negative light. After the start of the new millennium publishers finally began to abandon the code in favor of self policing their own books and posting age guidelines on the books themselves, with the Comics Code becoming officially defunct in 2011 which Archie Publishing was the last company to stop using it.

Looking for more challenged and banned books? Check out my guide on banned books in general: