Research guide that presents the historical background for United States voting and election laws, resources that explain the state of current elections and links to books, videos, and websites that help the average U.S. citizen become better informed abo 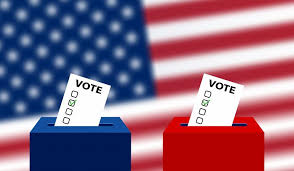 An election for president of the United States happens every four years on the first Tuesday after the first Monday in November. The next presidential election will be November 3, 2020.

The election process begins with primary elections and caucuses. These are two methods that states use to select a potential presidential nominee

. In general, primaries use secret ballots for voting. Caucuses are local gatherings of voters who vote at the end of the meeting for a particular candidate. Then it moves to nominating conventions, during which political parties each select a nominee to unite behind. During a political party convention, each presidential nominee also announces a vice presidential running mate. The candidates then campaign across the country to explain their views and plans to voters. They may also participate in debates with candidates from other parties.

What is the Role of the Electoral College?

During the general election

, Americans go to their polling place

to cast their vote for president. But the tally of those votes—the popular vote—does not determine the winner. Instead, presidential elections use the Electoral College. To win the election, a candidate must receive a majority of electoral votes. In the event no candidate receives a majority, the House of Representatives chooses the president and the Senate chooses the vice president.

What is a Typical Presidential Election Cycle?

For an in-depth look at the federal election process in the U.S., check out USA In Brief: ELECTIONS (PDF, Download Adobe Reader).

On the Issues or OnTheIssues is an American non-partisan, non-profit organization providing information to voters about candidates, primarily via their website.[1] The organization was started in 1996, went non-profit in 2000, and is currently run primarily by volunteers.

The United States Government: The Congress

The United States Government: The Presidency