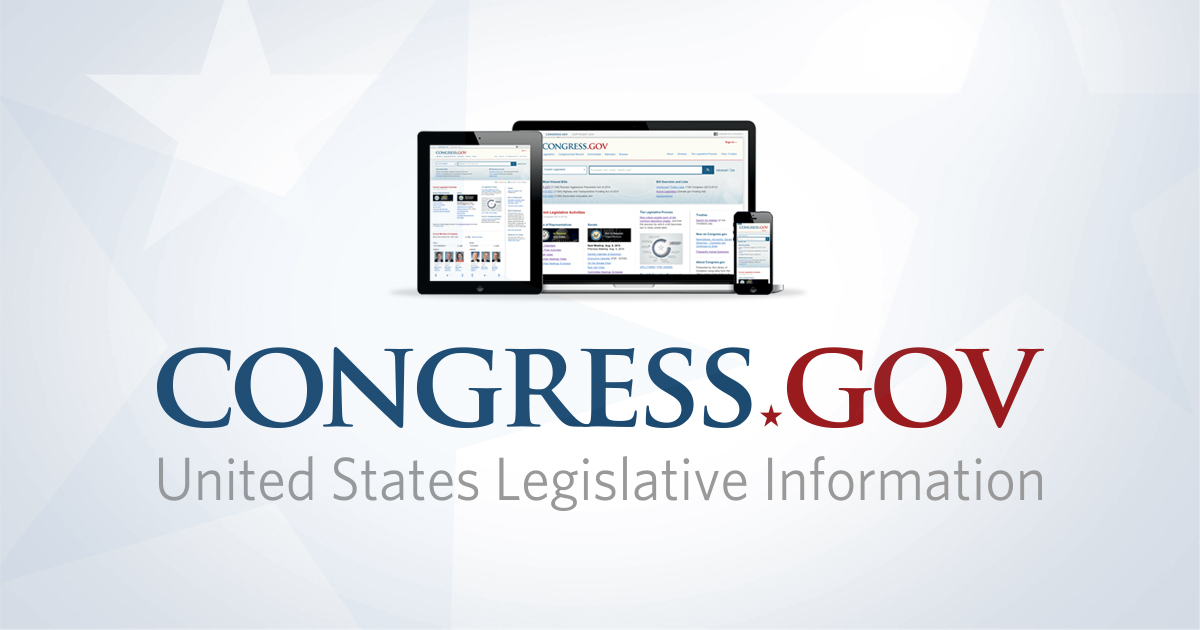 Congress.gov is the official website for U.S. federal legislative information. The site provides access to accurate, timely, and complete legislative information for Members of Congress, legislative agencies, and the public. It is presented by the Library of Congress (LOC) using data from the Office of the Clerk of the U.S. House of Representatives, the Office of the Secretary of the Senate, the Government Publishing Office, Congressional Budget Office, and the LOC's Congressional Research Service.

Congress.gov is usually updated the morning after a session adjourns. Consult Coverage Dates for Legislative Information for the specific update schedules and start date for each collection.

The scope of data collections and system functionality have continued to expand since THOMAS was launched in January 1995, when the 104th Congress convened. THOMAS was produced after Congressional leadership directed the Library of Congress to make federal legislative information freely available to the public.

Until all data sets from the legacy system are available from the new system, THOMAS will be accessible. THOMAS Retirement - Frequently Asked Questions provides additional information.

Congressional documents from the first 100 years of the U.S. Congress (1774-1875) can be accessed through A Century of Lawmaking.

A Tour of Congress.gov - Legislation

A Tour of Congress.gov - Congressional Record

It can also be browsed by:

An App for iPhone or iPad is also available. You can also subscribe or sign up to receive alerts.

A Tour of Congress.gov - Members

A list of current Members, by state, is on the Congress.gov homepage. Members serving in House and Senate leadership positions also are featured on the homepage.

Representatives and Senators are listed by name at Members of the U.S. Congress, which is accessible via the Members link in the navigation bar at the top of the page. Profiles for current members include contact information and leadership position titles.

Members of Congress, Since 1973

Members of the U.S. Congress features Member profiles for Representatives and Senators who have served since 1973 (93rd Congress). Members from the 71st to 92nd Congresses (1929 to 1972) who were still serving as of the 93rd Congress are included. Profiles can be faceted by congress, chamber, political party, and state or U.S. territory.

Member profiles provide interactive lists of sponsored and cosponsored legislation. You can narrow a member's list of legislation by selecting facets, also known as filters, on the left side of the page. Member profile facets include sponsorship (sponsored or cosponsored), congress, bill type, Subject - Policy Area, chamber, and committee (to which the legislation was referred).

Member profiles also include service dates, states, district numbers for Representatives, party affiliation, a picture (when available), a link to the member's entry in the Biographical Directory of the United States Congress, 1774-Present, and a link to remarks made in the Congressional Record.

The BioGuide Id, which originates in the Biographical Directory of the United States Congress, 1774-Present, is a unique control number associated with each present or former member of Congress. You can use the field qualifier memberBioguideId: and a member's BioGuide Id to search for a particular member profile. For example, select Members from the search drop-down menu and enter memberBioguideId:"C001080" in the search box to find Representative Judy Chu's member profile.

A Tour of Congress.gov - Committees

A Tour of Congress.gov - Committee Reports

The Committee Report page is searchable by Congress, Chamber of Origin, Committee and Report Type.

A Tour of Congress.gov - Nominations

A Tour of Congress.gov - Treaty Documents

The Treaty Documents page is searchable by Congress, Chamber of Origin, Committee, Status of Treaty Document and Treaty Topic.
https://www.congress.gov/search?q=%7B%22source%22%3A%22treaties%22%7D

A Tour of Congress.gov - Executive Communications

A Tour of Congress.gov - Leglislative Process

The Legislative Process page contains a video tracing the process of operations in the U.S. Congress. Following is a transcript of that video:

Overview of the Legislative Process (Transcript)

Article I of the U.S. Constitution grants all legislative powers to a bicameral Congress: a House of Representatives and a Senate that are the result of a “Great Compromise” seeking to balance the effects of popular majorities with the interests of the states. Our system currently provides for a two-year term of office for House members from the 435 population-based districts. In the Senate, voters of each state elect two Senators, who serve 6-year terms that overlap (such that only one-third of the chamber is up for election in any given election cycle).

The two chambers are fundamentally equal in their legislative roles and functions. Only the House can originate revenue legislation, and only the Senate confirms presidential nominations and approves treaties, but the enactment of law always requires both chambers to separately agree to the same bill in the same form before presenting it to the President.

Because each chamber has the constitutional authority to make its own rules, the House and Senate have developed some very different ways of processing legislation, perhaps partially flowing from their constitutional differences. In general, House rules and practices allow a numerical majority to process legislation relatively quickly. Senate rules and procedures, on the other hand, favor deliberation over quick action, as they provide significant procedural leverage to individual Senators.

In both chambers, much of the policy expertise resides in the standing committees – panels of members from both parties that typically take the lead in developing and assessing legislation. Members typically serve on a small number of committees, often for many years, allowing them to become highly knowledgeable in certain policy areas. All committees are chaired by a member of the majority party, though chairs often work closely with the committee’s ranking member, the most senior member of the minority party on the committee. In almost all cases, the ratio of majority party to minority party members on a committee roughly reflects the overall partisan ratio in the congressional chamber.

Committee members and staff focus much of their time on drafting and considering legislative proposals, but committees engage in other activities, as well. Once law is enacted, Congress has the prerogative and responsibility to provide oversight of policy implementation, and its committees take the lead in this effort. Both chambers provide their committees with significant powers and latitude for oversight and investigations into questions of public policy and its effects.

While the engine of legislative ideas and action is Congress itself, the President has influence in the legislative process, as well. The President recommends an annual budget for federal agencies and often suggests legislation. Perhaps more significantly, the power to veto legislation can affect the content of bills passed by Congress. Since it is quite unusual for law to be enacted over a presidential veto, Congress typically must accommodate the president’s position on proposed policies.

The process by which a bill becomes law is rarely predictable and can vary significantly from bill to bill. In fact, for many bills, the process will not follow the sequence of congressional stages that are often understood to make up the legislative process. The presentations on specific topics that follow present a more detailed look at each of the common stages through which a bill may move, but keep in mind that complications and variations abound in practice.