A guide on the different topics, available books, journals, and other ways you can research the American Revolution. 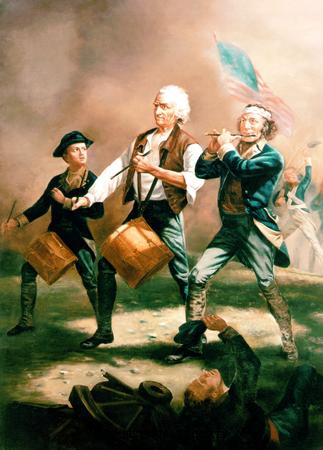 Here are a few links with lesson plans for the American Revolution.

A list of books about the American Revolution which have recently been added to the library. You can find these books in the New Nonfiction section on the 2nd floor to the left of the Adult Services desk.

When the French and Indian War ended in 1763, Great Britain found itself with a large debt. In order to pay that off, it levied taxes on its colonies. Including the 13 colonies of America. Tensions between colonists and Great Britain grew eventually resulting in the Boston Massacre in 1770. Tensions and taxes continued growing. Finally the colonists refused to pay the taxes on the Townshend Act (1767) saying they had no representation in parliament and therefore shouldn't be forced to pay. Parliament responded by repealing the Townshend Act and leaving a duty on tea. Angered, a group of colonists went down to Boston harbor and began dumping the tea on the British ships. This act is what sparked the revolution. The first battle of the revolution was at Lexington and Concord. The first shot there is also known as the "shot heard round the world." George Washington would become the leader of the Continental Army and lead America to victory. The last battle of the revolution was at Yorktown where Cornwallis surrendered to Washington. During the battles of the revolution the First Continental congress met and created the Articles of Confederation (1777). Those would stay in place until 1789 when the Second Continental Congress created the Constitution.

Maybe you've used our DMZ, Axis 360, and Freading resources to look for Fiction but have you ever used them for Non-Fiction? Here is a list of E-books available for download that cover the American Revolution. You may notice that some of these books are also in the library's print collection so if the book you want is checked out, you can always look for it online. The books are separated by the program used to download them. If you've never used our digital downloads before you can find instructions here. *The books here only represent a sampling of titles available through the library's digital collection.