This guide will help any bride, groom, or family member to help plan their wedding and access plenty of information about weddings and what it takes to plan one.

Welcome to this Wedding Planning LibGuide! Here you will find information on different aspects of Wedding Planning, as well as resources to help you plan that special day. This LibGuide features not only articles on everything you need to know about planning a Wedding, but also features how-to videos and features print resources available at HMCPL.

For more information on Wedding Planning, these materials are available at the Huntsville/Madison County Public Libraries and are availalbe for checkout.

Get Started Planning Your Wedding

THE ORIGIN OF THE PROPOSAL
In the 19th century, declaration of love was tantamount to proposal; arranged marriages did not include proposals nor did marriage by capture. Asking the bride's father for her comes from the era of arranged marriages.

THE ORIGIN OF THE ENGAGEMENT

The engagement is a means to an end - marriage. Indeed, the full term is "engaged to be married." At one time, however, the engagement was as important as the wedding itself. Anglo-Saxons were used to stealing away their brides-to-be. Romance, wooing and engagements were not in the picture. But the families of the women insisted on being reimbursed for what was, after all, a working member of the family. The engagement itself signified the intended transfer of ownership from father to husband and also provided a period during which the "bride's price" could be agreed.
Several centuries later, the situation was in reverse and fathers were paying future sons-in-law, or their families, a "dowry" to marry off their daughters. The engagement was again a time for agreeing on the payment, or dowry, and also a time for collecting an extravagant trousseau, at least for rich brides.

THE ORIGIN OF THE BEST MAN WEDDING TRADITION

In 200 A.D, the male Germanic Goths of northern Europe usually married a woman from within his own community. However, when there were fewer women, the prospective bridegroom would capture his bride from a neighboring village. The bridegroom was accompanied by his strongest friend (or best friend), who helped him capture his bride.

WHY THE BRIDE STANDS TO THE GROOMS LEFT

After the bridegroom captured his bride, he placed her on his left to protect her, thus freeing his right hand or sword hand against sudden attack.

THE ORIGIN OF THE TERM WEDDING

Although some brides were kidnapped, marriage by purchase was the preferred method of obtaining a wife. The "bride price" could be land, social status, political alliances, or cash. The Anglo-Saxon word "wedd" meant that the groom would vow to marry the woman, but it also referred to the bride price (money or barter) to be paid by the groom to the bride's father. The root of the word "wedding" literally means to gamble or wager! 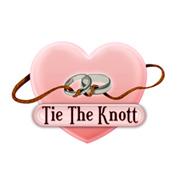 THE ORIGIN OF THE TERM "TO TIE THE KNOT"

The term "tie the knot" also goes back Roman times. the bride would wear a girdle that was tied in many knots which the groom had the "duty" of untying.

THE ORIGIN OF THE BRIDAL PARTY

This term has many origins from different cultures. In Anglo-Saxon times, the groom had the help of "bridesmen" or "brideknights" to help him capture and/or escort his bride. Later they would make sure that the bride got to the church and to the groom's home afterwards. The women who accompanied and assisted the bride were called "bridesmaids" or "brideswomen".

THE ORIGIN OF THE TRADITIONAL WHITE WEDDING DRESS

White is the ceremonial symbol of purity and virtue and hence of maidenhood. It has been so since Biblical times. But white has not always been the fashion for wedding gowns. Prior to the 19th century, it was fashionable to wear a colorful outfit that could be adopted for later wear.
A typical early American bride wore the best she should afford and potentially re-use in the prevailing fashion of the day. It might be a white linen shift over a petticoat or two, a blue and white Calico smock or something in pink, a fashion color, with velvet or trim. Colonial brides also wore pastel brocades and even cherry red satin, but the rites were most often performed at home than in a church.

Depending on which source you believe the following three women are credited for the popularization of the white wedding dress.
In 1499, Ann of Brittany wore the first white wedding gown.

Nellie Custis revised the wearing of white at her marriage to George Washington's favorite nephew on the ex-president's last birthday, February 22, 1799 and white has now been the fashion for some 200 years.
About 1820 white became popular for formal occasions, although pastels were in vogue until the end of the
century. When Queen Victoria wore white at her own wedding in 1840, it became the official color for brides, because it was considered a symbol of Biblical purity. Although fashions have changed, white is still symbolic of brides and the word "white" has come to symbolize happiness and joy.

THE ORIGIN OF "SOMETHING BLUE"

In early Biblical times, blue not white symbolized purity. Both the bride and groom usually wore a band of blue material around the bottom of their wedding attire, hence the wedding tradition of "something blue.

THE ORIGIN OF THE BLUE GARTER

We all know that something blue is lucky for the bride, but why a blue garter? This seems to stem from the noble Order of the Garter, the oldest order of knighthood in Europe. Its regalia includes a collar, a star and an actual blue velvet garter. Since queens and princesses are the only women invested with the Order, and a bride is a "queen for the day", she may enjoy royal prerogatives by wearing a blue garter below her left knee.

THE ORIGIN OF THROWING RICE

It is thought to have come from the Orient, where rice is a household symbol that signifies a full pantry. Thus, wedding guests through the ages have thrown rice to demonstrate their wishes for the prosperity of the new bride and groom.
It was also believed that to shower the couple with grain was to wish upon them a 'fruitful' union. It was believed that the fertility of the seeds would be transferred to the couple on whom they fell. While nearly all cultures have showered the wedding couple with symbolic food to ensure fertility, for many years it was rice that was used in America. Today, however, this sport is considered dangerous as someone could slip and fall when walking on the grains. Environmentalists say that rice can harm birds, being hard for them to digest. However, there is also biodegradable rice now on the market, making it possible to again use rice.
As an alternative, you use birdseed, potpourri, confetti, or bubbles. Tie the birdseed into the rounds of net. Coordinate the ribbon used to tie the packets with your color scheme. Or, packages of confetti can be passed out. For a different effect, non-staining bubble soap is available and the small bottles can be personalized with the couple's names. What a pretty sight it is to walk beneath a canopy of bubbles on camera a beautiful sight.

Here we've highlighted a few articles from popular bridal magazines that deal with Wedding Planning and the how to's.