A guide with resources about the Spanish-American War. 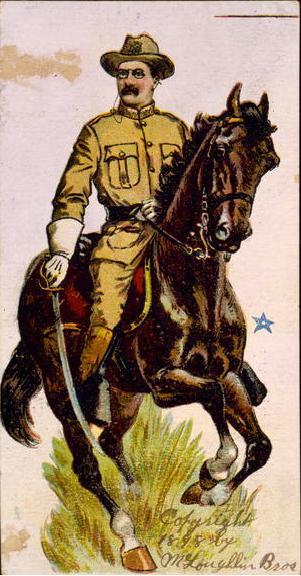 Rider Roosevelt by the McLoughlin Bros, 1898. Courtesy of the Library of Congress.

The Spanish-American War started in April of 1898 and ended in August of 1898 by December the Treaty of Paris had been signed by both Spain and the United States.

In 1868 the Cubans revolt, starting a thirty year struggle for Independence from Spain. This revolt only lasts ten years.

In 1893 the World's Columbian Exposition was held, garnering interest in America. This is where Frederick Jackson Turner gave his Frontier Thesis speech. During this time period ment like Theodore Roosevelt and Henry Cabot Lodge are pushing for expansion outside of the United States.

In 1895 Cubans again take up arms against Spain. Newspapers report on the atrocities committed by the Spanish towards the Cubans, garnering public sympathy from Americans.

On February 15th, 1898, the U.S.S. Maine explodes in Havana Harbor killing the 270 people aboard the ship. To this day historians are unsure as to what caused the U.S.S. Maine to explode, however newspapers printed stories blaming Spain which raised the American public's ire against Spain.

The war ends December of 1898 between Spain and America. America recieves control of Cuba, Guam, Puerto Rico, and the Phillipines, however, fighting in the Phillipines does not end until 1902.