The hawks are nesting outside the library.

Say hello to Athos, Porthos, and Aramis everybody. Our three, thriving, eyas are named after the Three Musketeers in Alexandre Dumas' novel. 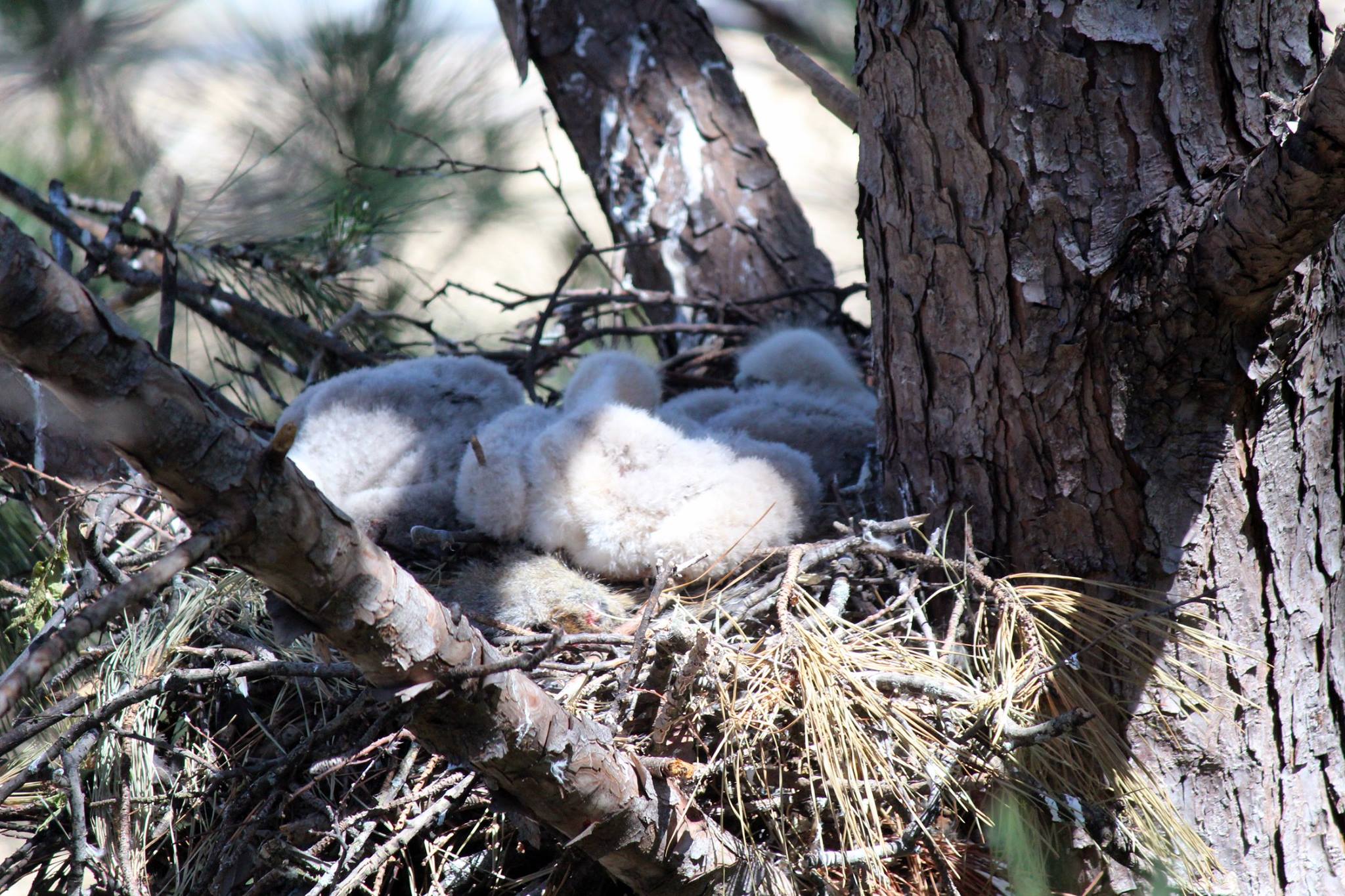 Our parent hawks finally have a name! The female is Zelda and the male is Scott after Zelda and Scott Fitzgerald. 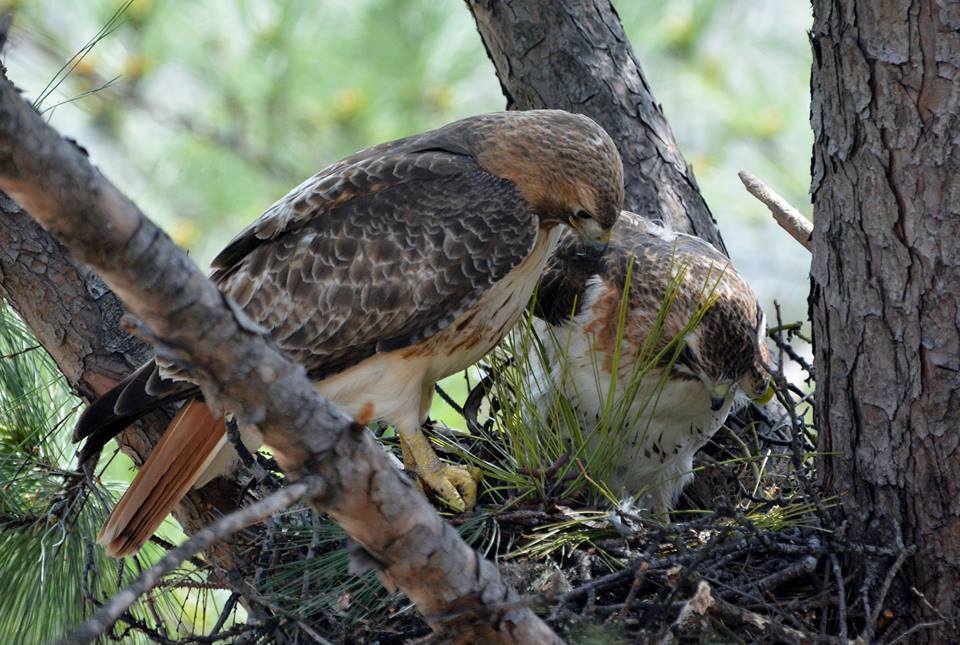 What a perfect beginning to Earth Day, the first of the chicks have hatched. We should see the next chick hatch in a day or so. 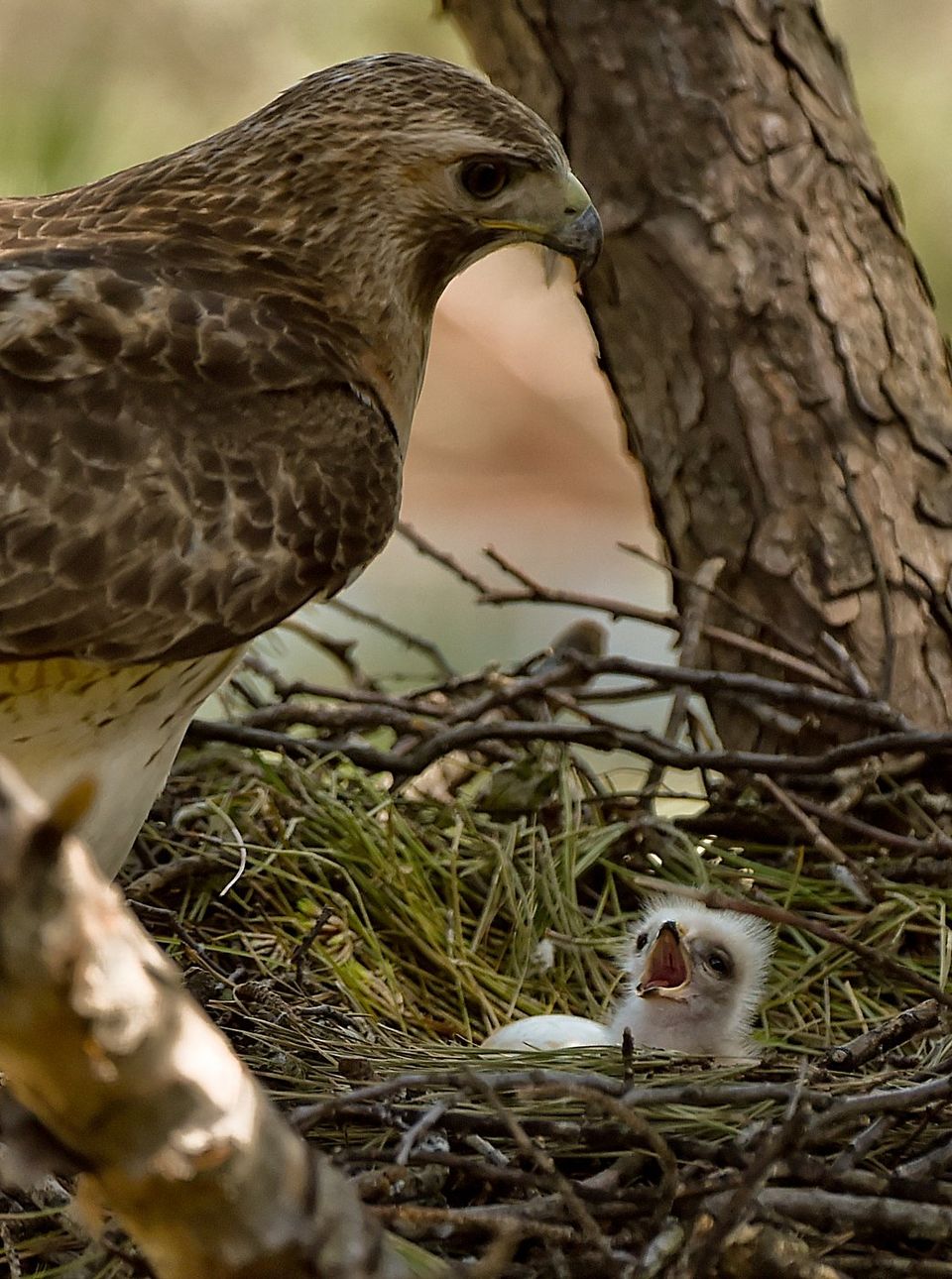 Photo Courtesy of Bob Gathany at Al.com. Check out his article for more pictures.

Our third egg has finally hatched and all three nestlings are happily jostling each other for the food their parents bring them.

Our second chick has made an appearance. We should see a third chick appear in a couple of days. For the next few weeks the mother will be sitting protectively over them while the male brings back food for her and the chicks.

Here's an update about our Red-Tailed Hawks brought to you by Library staff member Charles Boley.

It's getting close to egg hatching day. We might see the first egg hatch later this week!

The eggs usually won't all hatch at once. There could be a few days between when the first and last nestling appears. The young hawks will be on the nest or on branches near for a few weeks until they can make their first flight. It'll be exciting to see all the activity.

1) Non-migratory Red-tailed Hawks, like ours, often mate for life.

2) Red-tails mate for the first time in their second year.

3) Red-tails do sometimes return to the same nest or tree year after year. Other pairs may not use the same tree, but will nest very close to the original nest.

4) Red-tail territory size can include a roughly round space up to eight miles across, although in densely populated areas, dense with hawks that is, the size will often be a mile or less. Our hawks are part of a very dense Red-tail population. (I found two more active Red-tail hawk nests within two miles of the library.)

5) It's really, really tough to tell male and female Red-tailed hawks apart, tough for humans that is. The hawks don't have this problem. Although the females average larger than the males, there's a lot of overlap. In our pair, the female is a little bulkier than the male, but the size difference is only visible when the hawks are on the nest together. Our male has a bit more rusty color along the neck, but that's not always visible.

6) Both sexes sit on the nest, but the female usually is on the nest more often in a 24 hour period. Our pair swaps up nest duty about every 2-3 hours.

8) Red-tails regularly add green plants and small branches with leaves to their nests. Ornithologists call this behavior greening. Only the hawks know why they do this. Our pair does it every day.

9) A mated pair will hunt cooperatively, setting up ambushes for small mammals like squirrels. Red-tailed hawks are smart.

Video of a Tucka the hawk screaming over his dinner.

We're sad to say that our hawks have left the nest. We'll keep you updated if they use it again next year.

Hawks at the Library!

There are hawks nesting outside the library!
To see them go up to the 3rd floor, past the shelves to the back, and look out the far right window. Their nest is in the crook of the 2nd pine tree. Or check out our webcam! 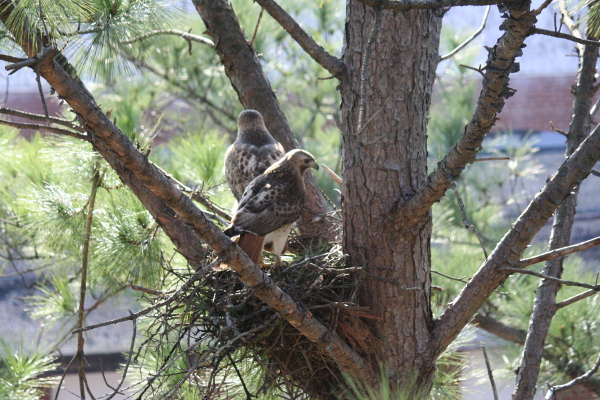 The Red-Tailed Hawk is one of the most common hawks in the United States and ranges from Alaska all the way down to Mexico. Red-Tailed Hawks are large, broad-winged, and almost football shaped birds which are usually spotted on telephone lines or soaring over open fields. Most red-tailed hawks are a reddish brown, like the two nesting at the library, and are easily recognized by their vibrant red tail. They have a varied diet that consists of small rodents, birds, and reptiles and are classified as carnivores. Red-tailed hawks are monogamous which means they mate for life with their partners unless death occurs. The most famous red-tailed hawk, Pale Male, has had a total of 8 wives in his 24 year lifetime.

Red-tailed hawks prefer to nest in the crooks of trees, on cliff edges, or on the ledges of tall buildings. Their nests are made up of sticks, weeds, leaves, and trash. Female red-tailed hawks lay anywhere between 2 to 4 eggs. The eggs are typically white or bluish white with faint to dark brown spots. Both parents incubate the eggs, taking turns laying on them until they hatch. The eggs take anywhere from 28-35 days to hatch. Once hatched the female stays with the young protecting them from weather and potential predators. The male spends his time hunting, bringing prey back to the nest. For the first 4 weeks the female with cut the meat up into smaller pieces for the chicks to eat, afterwards the prey is simply dropped into the nest for the chicks. Chicks first leave the nest at 6-7 weeks but are not strong enough to fly for a couple more weeks. Once they are strong enough to fly, the may continue to remain with their parents for several more weeks.*

For more information on Red-Tailed Hawks check out a book or visit the links below. 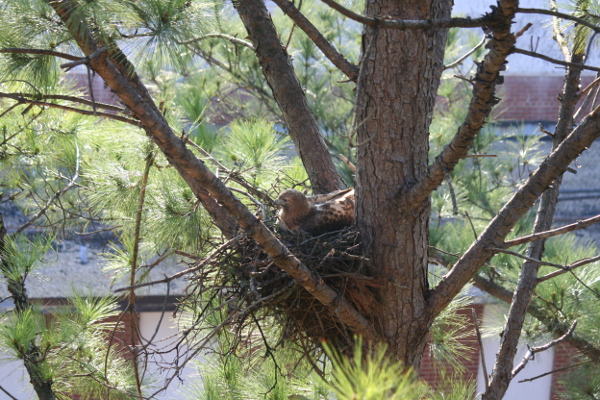